The Triad, which made its debut at the 2014 Japan National Yo-Yo Contest, has a stepped V-shape profile with stainless steel rings to maximize rim weight. Its hub is slightly convex, similar to a YoYoFactory Protostar, and has radially positioned notches along its inner rims as a result of the manufacturing process. The Triad comes stock with the usual 19.6mm-sized IrPad response and Double Straight (DS) bearing set-up.

An updated version of the Triad was released during the 2015 World Yo-Yo Contest. The new Triad has a more refined manufacturing process, reducing the price tag from 7800 JPY to 6480 JPY. The notches along the inner rims were removed, and the weight was substantially increased from 64.9 grams to 69 grams. Additionally, the engravings were changed to a more elaborate design and surround the axle hubs. 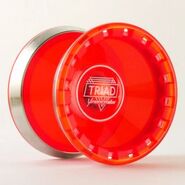 2014 version.
Add a photo to this gallery
Retrieved from "https://yoyo.fandom.com/wiki/YoYoRecreation_Triad?oldid=35763"
Community content is available under CC-BY-SA unless otherwise noted.