Auto-return clutch, complimented by starbursts
The Brain (full name: Yo-yo with a Brain) by Yomega is a yo-yo with a centrifugal clutch, which makes it return to the thrower's hand automatically when the yo-yo starts to lose spin. It is also the very first yo-yo to feature an auto-return clutch system. This yo-yo is great for beginners, as it helps the user to develop a strong, hard throw and to get a good grasp on the sleeper.

Upon its original release in 1984, the Brain (which was originally named the "Phantom" in early company literature) had quickly became a worldwide best-seller for Yomega, and has put the company on the map that is the yo-yo industry. The Brain features a distinctive "Convex" or "Standard" body shape that resembles the Modified shape used by the ProYo, but with rounded side caps. This body design was also used by two other flagship models in Yomega's line-up; the Fireball, which was released five years after the Brain, and the ball bearing Raider, which came out in 1991.

At one point in 2012, the Brain was re-released with redesigned clutch arms.

The Brain's patent has since expired. This allows other manufacturers to produce their own auto-return yo-yos, such as the Australian Black Mamba yo-yos by Abbe Toys, and the Duncan Reflex.

How the clutch works

The plastic transaxle sleeve on the Brain's axle features an O-ring on one end, and that end is inserted in the body half that contains the clutch mechanism. The clutch consists of two adjacent plastic arms, which are weighted with metal balls and are connected to the inside rim of the yo-yo with springs. These arms also have teeth on the other ends around the area of the axle.

When spinning, the centrifugal force pushes these arms towards the rims, thereby compressing the springs. When the yo-yo begins to slow down, the springs engage, forcing the clutch arms to the center of the hub, where their teeth grip around the O-ring, causing the yo-yo to return using the momentum of the decreasing spin. Also helping are a pair of starbursts, which helps to grip the string as the clutch does its job. It also makes the yo-yo easy to wind up.

The clutch system can be disabled by removing the O-ring from the transaxle sleeve, allowing the Brain to sleep like a Fireball, but the user would still have to get the yo-yo to return manually. 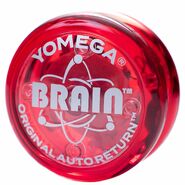