The Glide is a yo-yo produced by Yomega. It was first released in the Fall of 2012, after a year of engineering, technical refinement, and marketing research. The Glide is a yo-yo with competition-level performance straight out of the box. It has an angular, low-edged H-shaped body profile for minimal sleep loss, complimented by a bumped, blast-finished response area and catch zone for extreme grinding performance. It also uses silicone CBC response pads in the popular 19mm OD/Large Slim size for cross-compatibility, along with a genuine, officially-licensed KonKave C-bearing from Dif-e-Yo.

Now, just because this is a Yomega yo-yo, it doesn't mean that it is kid's stuff like the Brain, Fireball or even the Raider, which also has a ball bearing! The Glide is an unresponsive yo-yo, but as a competition-ready model, it is also a significant step-up in terms of performance from the likes of the Maverick and the Dash, and is truly an elite metal yo-yo.

The Glide came in many colorways, along with some detailed designs that could truly bring in some attention, be it plaid or even blue-tinted lightning bolts. Also released were a series of limited Star Wars edition Glides in six different designs.

In 2016, the Glide was re-released with a lower price tag, along with a narrower bearing to make it much more beginner-friendly. 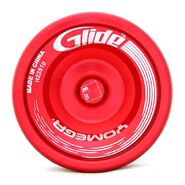 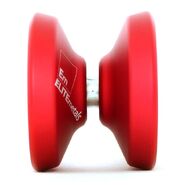 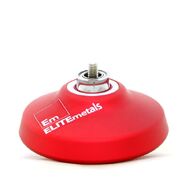 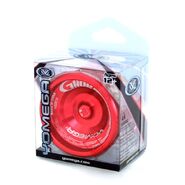 Retrieved from "https://yoyo.fandom.com/wiki/Yomega_Glide?oldid=41528"
Community content is available under CC-BY-SA unless otherwise noted.