Starburst
The Hyper Raider (Japanese: ハイパーレイダー) is a yo-yo licensed to Bandai for distribution in Asian countries by Yomega in the late-1990s as part of the Hyper Yo-Yo line-up.

The Hyper Raider is the Hyper Yo-Yo adaptation of the Yomega Raider, distributed in Asian countries by Bandai, most especially in Japan, where the Hyper Yo-Yo boom was in full swing at the time of its release. It features pretty much the same shape, ball bearing axle, and performance, but with edited side cap art now reading "Yomega-Bandai 1998 Made in USA Hyper Raider". It was noted by some to be a bit more responsive than the original Raider.

The Hyper Raider was also one of the most well-known and popular models in the original Japanese Hyper Yo-Yo line, having seen use by even the members of Team High Performance Japan.

A Hyper Raider hand-painted in pink. (from Dave Schulte's collection) 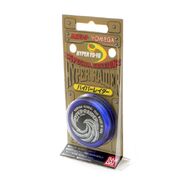 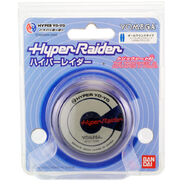