The RPM is a yo-yo by Yomega released in 1999. Its name stands for "Raider Performance Measurement", which leads to its most distinctive feature; internal, battery-powered computer circuitry that processes the yo-yo's speed and movement patterns in increments of Miles per Hour (mph), Kilometers per Hour (km/h), and Revolutions per Minute (RPM).

Through this technology, the RPM can also measure how long the user lets it sleep, how many loops performed with it, and detects mistakes to maintain a record in each of those categories. Much like the Raider that it is based on, the RPM features a ball bearing axle and starburst response. One of the yo-yo's body halves contained the internal circuitry, along with an LCD screen for visual output, battery covers, and three buttons; One for turning the yo-yo on and switching to different modes of play, another for viewing the high scores, and the third for showing the playing results. 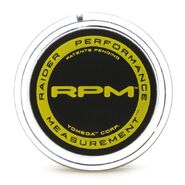 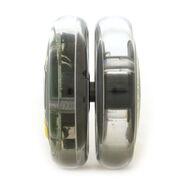 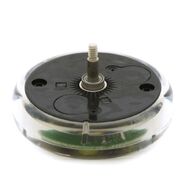 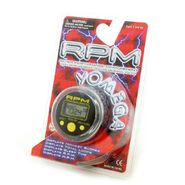 Retrieved from "https://yoyo.fandom.com/wiki/Yomega_RPM?oldid=42475"
Community content is available under CC-BY-SA unless otherwise noted.