Starburst
The Raider is a yo-yo produced by Yomega as one its three flagship models since the 1990s, alongside the Fireball and Brain.

The Raider, first introduced in 1991, is a yo-yo with the same Convex body shape as used by the earlier Fireball and Brain models, along with a traditional starburst response system, as well as one of the first modern ball bearing axles. It comes equipped with a tiny bearing measuring 3.962mm x 7.925mm x 3.175mm, smaller than even an A-sized bearing as used by the ProYo Turbo Bumble Bee and the original 1999 releases in Duncan's Hardcore series. In the late 1990s, the Raider gained its fame as a looper and became the yo-yo of choice for National and World Champion players, such as Jennifer Baybrook, Shinji Saito, and Alex Garcia. The yo-yo had also become a best-seller for Yomega, even to this day.

The Raider and two of its variants, the Saber Raider and the RB II were also licensed to Bandai for the Hyper Yo-Yo range in the late 1990s, at the peak of the yo-yo boom. Several signature editions of the Raider have been produced by the recent winners who used them. At the end of 2005, the glow yellow model became the signature model of Koji Yokoyama, with a glow red model the signature model of Shinji Saito. Both these and previous signature models feature custom sidecaps, not found on the standard production variants.

The Raider, when modified the right way, is by far one of the most popular choices for many winning players in 2A (two-handed looping) play.

Generally, this modification involves something done to introduce a very significant amount of friction into the bearing system. Many Raider mods are essentially a destruction of the components of the yo-yo to significantly reduce the string gap width. This is a relatively easy mod to do, but if done incorrectly, it may damage or even ruin the Raider, the mod link provided on the bottom of the article will help a lot.

Starburst
The Raider EX is an adjustable Raider intended to eliminate the need for modding. It has five different string gap settings, determined by the means of five color-coded sets of aluminum spacers (which can also be used with the standard Raider). These spacers come in the following order of thicknesses;

The EX also features a different axle system but the weight, bearing and shape are all relatively unchanged from the original Raider. It was first released on March 31, 2008. In most players' opinions, it is not exactly the best yo-yo. Not helping things, was how the fiasco at the 2007 Worlds was still relatively fresh in the minds of the community, especially with how Yomega's reputation became damaged from the fallout.

The Raider EX was also adapted for the Hyper Yo-Yo line as the SpiralJaguar (Japanese: スパイラルジャガー), but it comes with three sets of spacers instead of five. 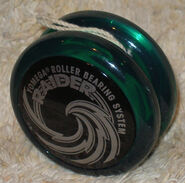