Starburst
The Saber Wing Fireball is a string trick yo-yo released by Yomega in the 1990s. It is also the overseas adaptation of the Stealth Fire, which was released in the Japanese Hyper Yo-Yo line. The Saber Wing Fireball is a variant of the classic Fireball with a flared "Saber Wing" shape that allows for an easier time by the user with performing string tricks. Of course, it has a teflon transaxle sleeve like the standard Fireball and starburst response. 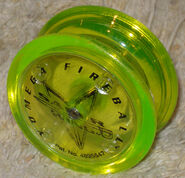