The Stealth Raider (Japanese: ステルスレイダー) is a yo-yo produced by Yomega and distributed by Bandai as part of the Hyper Yo-Yo line. It was first released in December 1997.

The Stealth Raider is a specialized version of the Hyper Raider, featuring the flared shape first seen in the Stealth Fire to allow players to pull off string tricks easier, such as Man on the Flying Trapeze and the Braintwister. Of course, it's got the same internal components; a ball bearing axle with metal spacers and a starburst response system.

The Stealth Raider was known as one of the most popular models of the original Hyper Yo-Yo line-up, especially with players from overseas, which resulted in the release of the Yomega Saber Raider yo-yo in North America and Europe. It was also re-released in the 2003-2004 iteration of the Hyper Yo-Yo range.

As time progressed, the abilities exhibited by the Stealth Raider were pushed further and further with new developments in yo-yo design. However, there's still a demand for this yo-yo by players both new and old. 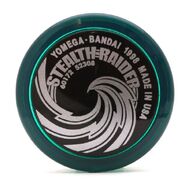 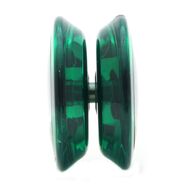 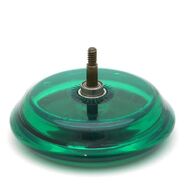 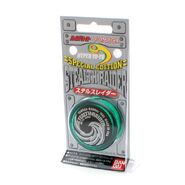 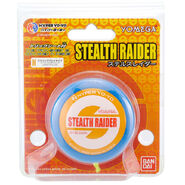 2003 Stealth Raider in packaging
Add a photo to this gallery

Retrieved from "https://yoyo.fandom.com/wiki/Yomega_Stealth_Raider?oldid=43023"
Community content is available under CC-BY-SA unless otherwise noted.